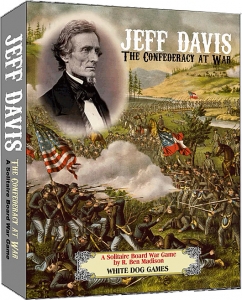 Jeff Davis: The Confederacy at War is a solitaire board war game designed by Charles S. Roberts Award-winner R. Ben Madison. You play President Jefferson Davis, managing the Confederate government and the Southern war effort. Your choices help determine the fate of great armies and the titanic struggle between Lee and Grant as well as peripheral or more dispersed campaigns like Morgan’s Ohio raid and Indian Territory. Decide which famous generals are worthy of scarce artillery and ironclads resources, while you unleash bushwhackers behind Union lines and rush reinforcements into battle on your rickety rail network. Back in Richmond, you’ll push the Confederate Congress to enact your reforms and overcome the inefficiency of States’ Rights as you defend key cities vital to your political survival. Dispatch your cabinet members as economic troubleshooters to prop up agriculture, industry and infrastructure for the war effort. Slavery is a major factor in your economy, but you will pay for most of your actions through the cat-and-mouse game of blockade running. Choose which armies to supply or if to invade the North as you calculate where the next Union hammer might fall. Can you hold out long enough to trigger British and French intervention? Re-fight the Civil War as Jeff Davis!