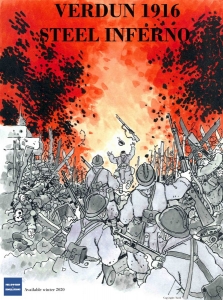 Verdun 1916, Steel Inferno, is a card driven, area based, simple wargame about the year long fighting around Verdun.

The game is based on monthly turns and allow for a tense, action driven contest which includes all the event of 1916 (like the Somme offensive) and their interaction with the Verdun battlefield.

Both side get the initiative as the French counter attack at the end of 1916 is also simulated.

One introduction scenario, two short scenario playable in a short session and one campaign game playable in an afternoon.