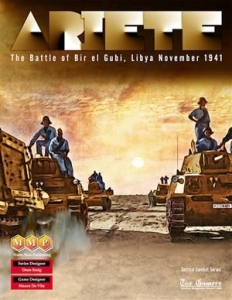 Moming of 19 November 1941: General Mario Balotta, commander of 132nd Armored Division Ariete, the only Italian armored division in North Africa, is completing his defensive dispositions to cover the southern approaches to Tobruk. He orders his division's motorized infantry regiment, the crack 8th Bersaglieri, to occupy three battalion strongpoints around a key cross-roads near the well (bir) of Gubi. The 8th Bersaglieri, supported by the reinforced divisional artillery, begins moving into position around Bir el Gubi and digging in. Most of the M13/40 tanks of Ariete 's understrength 132nd Tank Regiment are kept to the rear.

At the same time, General William Henry Ewart Gott, commander of the British 7th Armoured Divi-sion, orders the 22nd Armoured Brigade (Brigadier John Scott-Cockburn) to attack the Ariete at Bir el Gubi, a complete change from his original orders for the brigade to secure Sidi Rezegh, 25 miles to the north. The reason for the change is still not clear: perhaps Gott hopes to give this well-equipped but inexperienced brigade an opportunity to season itself against an Italian formation that he assumes will be a weak opponent; possibly he just wants to clear his division's left flank before advancing. Whatever the reason, the full-strength brigade, equipped with 162 brand new Crusader tanks, is eager to emulate the Commonwealth's easy victories against the Italian Tenth Army die previous winter.

The stage is set for a swirling desert battle between evenly matched opponents.

Ariete covers this entire mobile action in turns representing 30 minutes each and a map scale of 150 meters per hex. Units range from sections to platoons. A minimal amount of special rules bring the Tactical Combat Series to North Africa, highlighting the unique tactical challenge of the desert environment.

The Italian player must manage a mobile defense against stronger British armored units until reinforcements arrive in the form of the 132nd Tank Regiment. He must make good use of artillery and AT assets (especially truck-mounted 102mm guns) to bloody the Brits and set them up for an armored counterattack.

The Commonwealth player must solve the problem of using an armor-only force to crack defensive positions held by a well-led combined-arms force. The desert environment, with swirling dust clouds and relatively long lines of sight, will not help him in this regard!

Destruction of the III/8 Bersaglieri, 2 turns

The Nearest Thing to a Cavalry Charge, 6 turns

The Attack on the 8th Bersaglieri, 6 turns

Attack of the 4th County of London Yeomanry, 11 turns

Note: Players will need to provide one red, and one white 6-sided die for game play.

Note: In order to keep production costs down, Ariete is produced as a bagged game only; there will not be a boxed edition.