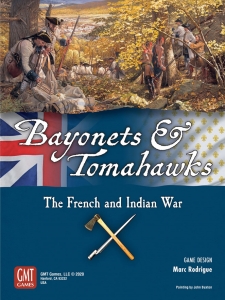 "You have brought into this place the art of war of the world beyond the ocean; but for the knowledge of these forests and the way of making war here, we have the advantage over you." --Indigenous leaders to French General Montcalm, August 5, 1757. War has broken out on the North American continent, pitting the French and British colonial empires against each other. Although they have faced off before, this time something is different: large scale European-style warfare transforms this theater of war. But the wilderness expanse as well as the involvement of many indigenous nations hampers Old World tactics. Will you be ambushed in the woods like British general Braddock in 1755? Will you charge desperately against disciplined volleys like French general Montcalm in 1759? Or will you perpetuate the glory of your king in the New World?

Bayonets & Tomahawks is a two-player grand strategic game depicting the French & Indian War, which raged from 1755 to 1760 and in which France's North American empire was conquered. Take command of either the French or British to fight all facets of the conflict: army maneuvering, diplomacy with indigenous nations, raids, battles, construction, naval operations, sieges, and more. With scenarios varying from a single year to the whole war, as well as rules for team play, Bayonets & Tomahawks is perfect for new and experienced wargamers alike.

Each in-game Year contains nine Actions Rounds as well as three administrative Logistics Rounds. During Action Rounds, players use historically based cards for events and actions. This innovative system without hand management builds on card-driven games such as Twilight Struggle while keeping the game accessible and fast-paced. An exciting battle system featuring custom dice presents challenges that reward careful planning. Victory is achieved by capturing key spaces and conducting raids in enemy territory. Over just a few hours, relive a war that shaped the course of history in North America and beyond!

"Now, the battle is over, but we must still win a war. It is my fondest hope that the other British Generals will learn how war in America must be fought."