World at War 78: Drive on Suez 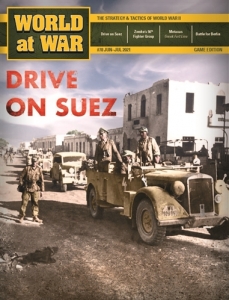 Drive on Suez: Rommel Drives Deep, 1942 is a solitaire game where the player takes command of the German-Italian Panzer Armee Afrika (PAA) during the 1942 campaign in Egypt as Rommel drives on the Suez Canal. The game system plays the Allied Middle East Command (MEC). The game begins immediately following the PAA capture of Tobruk in June 1942 and continues through to the time of the August battle of Alam el Halfa. Your goal is to seize strategic objectives such as major cities in the Nile Delta and the Suez Canal. You will have to deal with a wide variety of situations, from battling against fierce counterattacks to figuring out ways to extend your lines of supply. While Suez is a solitaire game, multiple players can play as the PAA team, making decisions by consensus, or each managing operations along one of the Routes of Advance. Each turn can represent any amount of time from two days of intense combat to two weeks of refitting and reorganizing. The map scale is approximately 45 km to the inch. Ground combat units represent everything from battalions to divisions. Air units represent two to six groups.