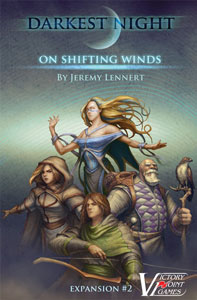 The wind is from the north today, carrying a foul stench.

I used to think of necromancy as a black fog, thickening and spreading, covering us in oppressive gloom. I see, now, that this was wrong: A fog is made all of the same stuff, but our doom has many distinct facets, each one we penetrate revealing a new evil behind. Some have become terrified of the darkness; others made numb by despair. Many have had their bodies rent, while others are starting to lose their minds. A scout has just sent word of another new variety of monstrosity that has appeared near the village...but also the discovery of a new artifact that may help us fight them.

Fate, it seems, never runs out of ideas. We can only handle each new challenge as best we can as it arrives on shifting winds...

Darkest Night: On Shifting Winds from Jeremy Lennert expands the game with a variety of new content: It adds the Ranger, Scout, Wayfarer, and Wind Dancer as new playable heroes, introduces eight new blights and new treasures to search for, and also includes new Event and Artifact cards.

On Shifting Winds can be used either with or without the first expansion, With an Inner Light.

Note: This game requires that you (or someone in your group of players) own a copy of Darkest Night.