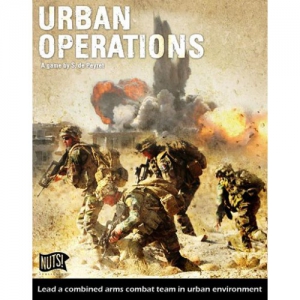 3 campaigns (16 scenarios) including some famous fights:

US Marines in Fallujah (04)

From the very beginning the development of Urban Operations, all the complexities that occur in urban warfare have been taken into account. On a classical game board, terrain symbols on the map and specially designed rules help to represent weapons effects, which are one of the main sources of casualties during urban fightings.

In the same way, the map system allows the management of distant fire, even from building to building, as well as close quarter battle from room to room. When explosives are used to breach walls, or when a shell hits its target, collateral effects of the explosion are taken into account. It was also critical to integrate one of the major players of today’s conflicts, which is the civilian population. The presence of non-combatants often complicates the way forces can use their weapons, especially against irregular opponents.

In addition, the presence of tactical leaders is a real asset for assault squads. And combat service support teams can deliver logistical support on the frontline, in order to enhance the operational status of any element.