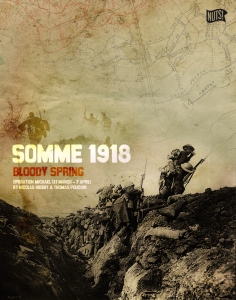 Somme 1918 is the second game in a series that covers all of the offensives on the Western Front in 1918 and the Sequel to Marne 1918: Friedensturm.

Somme 18 is different from Marne 1918 because it covers only one battle, Operation Michael, while Marne 1918 simulated a series of offensives, from Blucher to Friedensturm. The result is a more intense and nerve-wracking game that takes place over eight turns (from the end of March to mid-April), at least half of which are composed of three operational phases. Both players will face difficult challenges. The German player needs to re-create the historic breakthrough and has to put in every effort to reach Amiens. The Allied player has to resist succumbing to panic in the first turns in order to organize an effective defense, and then a counter-attack near the end of the game.

While the basic rules in Somme 18 are identical to those in Marne 1918 (with the exception of the air rules, which have been completely revised), the advanced rules will be very different. The principal reason is the length of Operation Michael, about fifteen days, which does not give an opportunity for the campaign management rules of Marne 1918 to be used.

So, all of the unit management tracks have disappeared and have been replaced by one table that manages the replacement and re-construction of units. Strategic movement has also been greatly simplified and adapted to the tempo of the game.

Somme 1918 will of course be enriched by numerous specific rules, simulating the particularities of this battle.

The arrival of French reinforcements without their artillery support, allowing a quicker deployment of troops coupled with a reduction in their value.

Inter-Allied Cooperation: This will be extremely reduced at the beginning of the campaign.

Evolution of the use of Stoss: The doctrine of using assault troops had been principally introduced by General von Hutier, in Russia and Italy. At the beginning of Operation Michael, the generals commanding the Second and Seventeenth armies used their Stosstruppen in frontal assaults, wasting these elite forces and provoking fury from Ludendorff. A rule thus simulates the evolution of this doctrine.

The Doullens Conference: At the height of the German offensive, while the French Army under Petain prepared to cut its ties with the British, Haig accepted that he be placed under the command of Foch, finally creating an inter-Allied command. This rule simulates this conference, tied to German conquests. It also plays a part in obtaining victory points. In fact, this rule is really the heart of the game and we think that players will be pleased with the proposed system that will bring together the different parameters of this game.