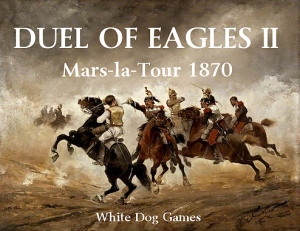 Designed by Hermann Luttmann and with game art by Dan Lamb, Duel of Eagles II centers on the battle of Mars-la-Tour, which was fought on August 16th, 1870 and represents the pivotal battle of the Franco-Prussian War. In fact, many historians consider it to be one of the most important battles of European history, as it essentially sealed the fate of Napoleon III and his Second French Empire and confirmed the rise of Bismarck’s German Empire. This new edition of the popular and acclaimed game includes expanded rules, two new scenarios for a total of three scenarios, and thick, laser-cut counters and markers.

Each Infantry Combat Factor is 600 Men