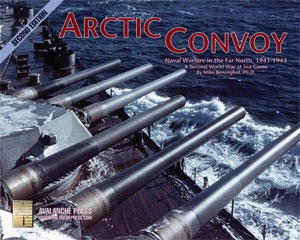 Adolf Hitler launched his sneak attack on the Soviet Union in June 1941. The Red Army reeled back from the assault, losing thousands of tanks, guns and planes. On 21 August 1941 the first convoy loaded with equipment and weapons left Iceland for the Soviet Arctic port of Archangel. For the next two years, the Royal Navy would force through convoys to the Soviet far North against enormous risks and terrible odds.

Arctic Convoy is the newest boxed game in the Second World War at Sea series. It covers the Allied attempts to push convoys through the Norwegian and Barents Seas while German aircraft, submarines and surface ships try to stop them. Famous convoy operations like those of PQ12 and PQ17, British carrier raids, German-Soviet destroyer skirmishes along the Arctic coast — all of these and more are included. Like all games in the series, this one come stuffed with scenarios and variations on them.

Most scenarios are very straightforward — each side knows what the other must do. The Allied player has large convoys of vital merchant shipping that must reach their destination. The German player has bases in Norway well-placed to intercept them, with submarines and aircraft that can hit them almost continuously. As in Bomb Alley, aircraft are drawn in a semi-random fashion so neither player has perfect intelligence about their numbers and location. German surface ships are few in number, but there's a lot of open sea in which they can hide and strike the convoys at vulnerable moments. And with war raging simultaneously on many other fronts, the convoy escort forces are stretched very, very thin.

Monster of Altafjord: the battleship Tirpitz in her Norwegian lair, 1943.

The Germans have the battleship Tirpitz and battle cruiser Scharnhorst, plus cruisers like Admiral Scheer and Admiral Hipper and a flock of destroyers in support — and most of the German ship counters have all-new artwork. The Allies have powerful British and American battleships like Washington, Duke of York and Alabama, but it's rare to see more than one of them enter the combat zone by herself. They also have aircraft carriers, but when the weather turns nasty, these become little more than inviting targets for U-boat skippers. And the weather's nasty most of the time.

There are two maps, covering the Norwegian and Barents Seas from Iceland in the southwest to Novaya Zemlya in the northeast, from the Norwegian coast to the Arctic pack ice. It's one of the larger play areas in the Second World War at Sea series, and unlike Leyte Gulf's three maps, both of these are in use in almost every scenario. Players quickly get a sense of the huge and desolate oceans in which they must operate.

The tactical map is a generic blue field of hexagons, used to resolve surface combat. There, ships maneuver and fight using their gunnery and torpedo factors. Each player rolls a number of dice according to the ship’s capabilities, hitting on a result of 6. Gunnery and torpedo damage tables give the results: ships can suffer damage to engines, hull or armament. Air attacks are resolved in similar fashion. The combat systems yield results rapidly but in a historically accurate fashion, giving a good balance of fun and insight.