ASL Blitzkrieg in the West - The Central Campaign 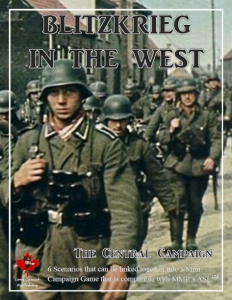 This six-scenario pack revolves around battles of the German invasion of Fortress Holland and its Blitzkrieg into Belgium and is compatible with MMP's ASL™ System and modifiable to be used with other miniature Wargaming systems.

Blitzkrieg in the West - The Central Campaign scenarios can be played separately, or the six scenarios may be linked together to form a campaign game by playing each scenario in order. At the conclusion of each scenario, both sides total up their Victory Points (VP); and at the end of the last scenario these VP are totalled, and the side with most VP wins.

Blitzkrieg in the West - Central Campaign

BWC-7 The Maastricht Bridges: The initial goal was to capture the bridges over Maas River intact. Overhead, gliders laden with engineers silently descended on Fort Eben-Emael and the bridges across the nearby Albert Canal. The roar of motorcycles and armoured cars filled the sleepy streets of Maastricht, as reconnaissance units raced westwards, hoping to capture the bridges before the Dutch could destroy them.

BWC-8 Rearguard Action: The Belgians were hoping to fight along the Albert Canal for five or six days, but found their line penetrated, their defences collapsed, and ordered the withdrawal back to the Dyle Line. Pressed by the advancing elements of the German 4.Panzerdivision, the Belgian 7ème Division d’Infanterie was forced to fight a rearguard action.

BWC-9 Holding the Line: Throughout the day, the German spearhead poured out of the Maastricht bottleneck and headed southwest. The Belgian III Corps had withdrawn from the Liège fortifications to avoid being encircled. One regiment, the Régiment de Forteresse de Liège, stayed behind to hold the line and disrupt the German advance.

BWC-10 Wrong Position: The night of 11 May, the British 3rd Infantry Division, under the command of Major-General Bernard Law Montgomery, reached its position on the Dyle River at Louvain. However the Belgian 10ème Division d’Infanterie had arrived the day prior and refused to move, forcing the Montgomery to place his division under the Belgians command, despite knowing that when the German shells began to fall the Belgians would withdraw.

BWC-11 Bala-Tiger Post: The Germans assaulted into the city of Louvain and initially succeeded in pressing back some posts of the 2nd Royal Ulster Rifles to the railyards. Here a tangle of railroad lines, sheds, and warehouses made it a difficult area to traverse. On the extreme left of the Ulster’s position a platoon defended a position known as “Bala-Tiger Post” in honour of the two subalterns who commanded it in turn.

BWC-12 The Jocks are Here: The German assault into the city initially succeeded in pressing back some posts of the 2nd Royal Ulster Rifles to the railyards. A counterattack by the 1st King’s Own Scottish Borderers managed to drive the Germans back from the railyards, re-establishing the British lines and forcing the Germans to halt their assault in order to bring up fresh troops.