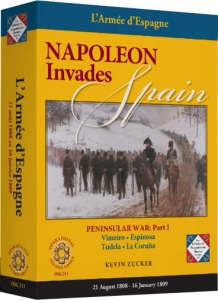 A series of defeats provoked Napoleon to lead 200,000 men into the Peninsula. The British attacked near Burgos but were soon forced into a long retreat punctuated by the battles of Sahagún, Benavente and Cacabelos, ending in an evacuation from Coruña in January, 1809. Moore was mortally wounded while directing the defence of the town in the Battle of Coruña. After only two months in Spain, Napoleon handed command over to Marshal Soult and returned to France, to prepare for renewed hostilities against Austria.

Wanting to stop the British forces before they were reinforced, General Junot arrived on the road from Torres Vedras, forcing Wellesley to extend his line. Several French assaults were halted; the last—by the grenadiers—almost carried. After losing 1,500 killed and wounded, 300 prisoners and 12 guns, Junot’s Army was granted free passage back to France by the controversial Convention of Cintra. The British lost 134 killed, 534 wounded and 51 missing.

A Spanish army under General Joaquin Blake advanced, hoping to cut the French lines of communication back to Bayonne, but instead was defeated by a French army under Marshal Lefebvre at Zornoza on 31 October, and retreated back to Bilbao. Blake then turned at bay to rescue one of his divisions trapped in the mountains (5 November), before resuming his retreat.

On 21 November Castaños was between Logroño and Tudela. The French III Corps had crossed the Ebro at Logroño, heading east towards Calahorra, while Marshal Ney’s column had reached the upper Douro valley and was headed in the direction of Tudela. This left Castaños’s army in serious danger of being trapped between two French corps.

After a desperate retreat across the mountains of north western Spain, the British army had reached the coast at Betanzos by the morning of 10 January 1809.

This game uses the two TLNB Universal Card Decks (French and Coalition). If you do not have them in another OSG game, they can be ordered separately.