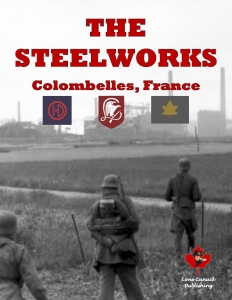 The Norman city of Caen and the airfield of Carpiquet were important targets on D-Day. The British and Canadian troops that landed on Sword and Juno Beaches were tasked with capturing these vital objects. The British and Canadian troops did not get that far on D-Day. Carpiquet would finally be captured on 8 July during Operation WINDSOR with Caen falling the following day during Operation CHARNWOOD. CHARNWOOD however only managed to capture of the northwestern part of Caen, the rest of the city would fall during Operation GOODWOOD on 18 July. Colombelles is an industrial town north east of Caen, east of Hérouville and the Orne River. The entire area was dominated by the chimneys of the Société Métallurgique de Normandie (Metallurgic Company of Normandy), a giant steel factory at Colombelles. The chimneys were the ideal observation posts over the battlefield for the Germans. General Bernard Law Montgomery decided on an operation to take these posts out. The operation was aptly called Operation STACK.

The 16.Luftwaffen-Felddivision (Air Force Field Division) was created in December 1942 and was taken over by the Wehrmacht (Army) in November 1943. On 16 June 1944 the division was sent to Normandy, where it fought major actions against the British/ Canadians west of Caen in early July. The division took heavy casualties during the fighting with the remnants of the division retreating across the Orne River and taking up positions with the 21.Panzerdivision. Having suffered badly in the preliminary bombardment, the already shaky unit was seriously demoralized and of questionable reliability when the battle occurred.

Luftwaffen Füsilier Batallion: The men of the Füsilier Batallion provided the division’s reconnaissance. With one company issued with sub-machine guns and mounted on bicycles for faster movement; they scouted out enemy positions in the advance or quickly moved to fill a gap in the line on the defence.

PIPERS Some think that bagpipes are a terror weapon, designed to break the enemy's morale, but the Scots find them inspiring and will follow a piper through the Gates of Hell. Knowing this, Pipers rarely let minor things like wounds keep them from their duty.