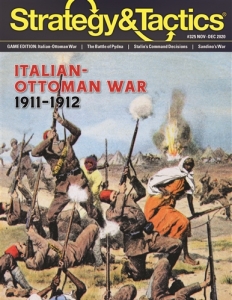 Italian-Ottoman War 1911-1912 is a two-player wargame using a variation on the system used in Windhoek (S&T #313) simulating the Italian invasion of the territories that became Libya in 1911 and the subsequent campaign that ended in the following year. The campaign saw the Italians seize the coastal towns, but the Ottomans, supported by local Arab and Bedouin tribes, fell back into the interior. The war came to an end via Italian naval attacks in the Aegean and elsewhere, with the Ottomans finally ceding Libya to Rome. This laid the foundation for the establishment of an Italian colony and had an obvious effect on the campaign in North Africa during World War II. Scale: Each hex represents 45 kilometers, with each game turn one to two months. Units are at the battalion level.