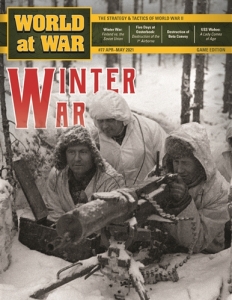 Winter War is a two player operational level wargame covering the Soviet invasion of Finland over the Winter of 1939-40. The Soviets initially expected a quick victory. However, the Finns, under the leadership of Carl Gustav Mannerheim, resisted and outmaneuvered the more ponderous Red Army forces. The game system is based on the asymmetrical situation of the campaign. The Soviets have a preponderance of forces. The Finns have superior tactics and the knowledge of the terrain. Both sides must exploit their advantages to be victorious. The game has special rules to represent all these differences, e.g. unit breakdowns, special forces and Finnish “motti” tactics. Each hex on the map represents circa 21 miles. Each turn of play represents ten days. Ground units represent detachments, battalions, regiments, brigades, divisions and corps. Aircraft units represent the number of sorties to accomplish a mission.